Where is Mashhad? Golriz’ hometown is about as far away from the Iraq-Iran border as you can get, about 1,600km – that’s the entire length of New Zealand. Yet she claimed:

I remember the bombs, the sirens, running to the basement. Waiting. Mostly I remember the kids, my age, who stopped speaking because of shell shock.

Now, she could very well remember the sirens and various drills that would have been conducted throughout all Iran. She likely can remember all those shell-shocked children who fled to Mashhad to escape that gruesome war. But it is extremely unlikely that she herself was even in danger of being bombed. That’s not a problem. It’s only a problem when you lie about it.

She’s a refugee. But what does that mean? Her family didn’t flee from war, they claimed political refugee status. The lines between refugees, asylum seekers, and economic migrants have become a little blurred. Her father was a Shia Muslim and her mother a Kurdish Sunni Muslim, but it appears they rejected Islam and Golriz identifies as agnostic. This led to their status as political dissidents and their arrival in New Zealand. There doesn’t seem to be much information floating around about exactly what persecution they faced or what beliefs they held.

There’s unmarked mass graves of people who had registered as communists. The regime was particularly harsh on political dissidents.

Since she joined the New Zealand equivalent of the Communist Party, could it be that her parents had communist sympathies too? It is no secret that the communists and Islamic fundamentalists worked together to overthrow the Shah. Thank what you may about this connection, but it should be noted that Iranian leftists were the “useful idiots” that helped bring down the Shah and plunge Iran into theocratic darkness.

Golriz has been portrayed as a champion of human rights by the Green Party, yet why is there a cordial photo of her with a man who incited genocide as she served on his defense team? Now, of course everyone deserves a fair trial and that’s part of human rights too, although not generally what the Greens mean when they talk about human rights. It’s not a problem when you’ve worked on the defense team for genocidal murderers, but it is a problem when you’ve allowed yourself to be presented as working on the prosecution to put war criminals behind bars. In her interview with Kirsty, Golriz stated,

It’s just like any criminal trial – although the politicians are so charismatic.

You have to simply focus back on the evidence and just be a lawyer.

These photos frame her earlier statements in a whole different light.

Lastly, we come to the issue of genocide denial, or rather genocide apologism and victim blaming. She co-authored a paper with another lawyer, Peter Robinson, doing exactly that. It’s not really a problem if you write a paper denying or apologising for genocide, but it is a problem when you’ve been portrayed as a champion for human rights. It makes you a hypocrite.

A large part of her defense hinges on statements like “I never claimed”. Yet her confidant, Kirsty clearly portrayed her as being all these things that she is not. There is no record of Golriz objecting to how her friends held her up as a shining beacon to the nation. She allowed the Green Party to portray her as having worked on “restoring communities after war and human rights atrocities, particularly empowering women engaged in peace and justice initiatives.” The omissions are glaringly obvious.

All of this is somewhat of a shame. As someone whose family fled Islamic persecution in search of a free nation, it’s sad to see that instead of fighting against the Islamic oppression of women in her former homeland and the Marxist ideology that helped to bring the Islamists to power, she’s working hard to bring all that to New Zealand. In her maiden speech to parliament she went as far to say that she wants to be like Keith Locke, a man who praised the rise of communist Pol Pot and Khmer Rouge right before they went on a genocidal rampage (and ironically Golriz worked to prosecute members of the regime for it later).

Do I think that Golriz should resign? No, I don’t. There are plenty in parliament who are frauds, liars, and even criminals. Politicians as a whole are a corrupt bunch. This makes parliament the perfect place for her. This makes her the perfect face of the Greens. New Zealand should be constantly reminded of her hypocrisy and the dishonesty of the Green Party. If she goes down, there will simply be another to replace her, perhaps someone worse. This is the Green Party we’re talking about after all. 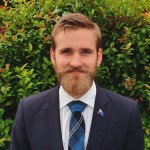 The Enemy State of China 2 (the Vivid Remix)